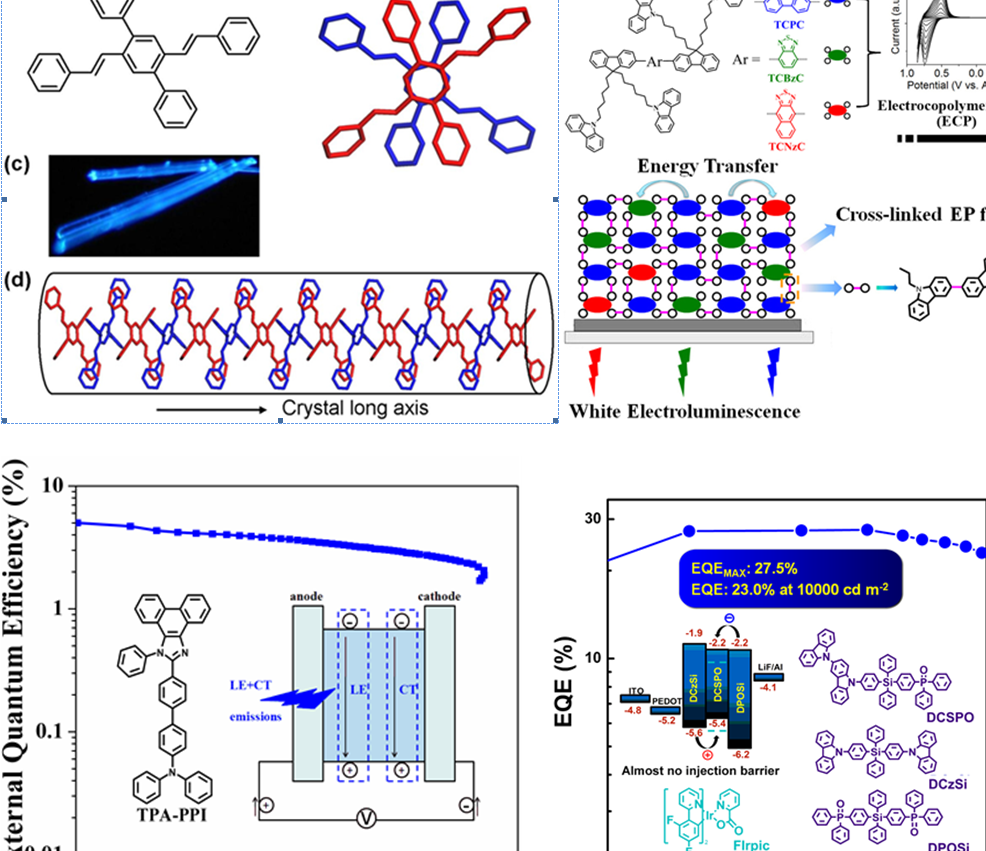 The research and development of organic functional materials is of great importance and as a new growing point in the field of advanced materials. In recent years, organic functional materials have made remarkable progress and breakthrough in organic light-emitting diodes, solar cells, sensor and other relative optoelectronic area. For example, organic photoconductive materials have been widely used in reprography and laser printers. OLED/PLED display technology has been applied in the small display area such as cell phone, personal data processor and car dashboard. And large display screen technology (colored TV) has also gradually become mature and met the requirements for markets. For sustainable developments in organic functional material research and their applications in the device fields, it is of great significance to explore the pathway of improving the material performance and developing new material system by effective combination of theory and experiment.

Our research currently concentrates on: 1) Supramolecular Optoelectronics: We seek molecular self-assembly method to fabricate the optoelectronic devices (light-emitting, FET, etc.). It needs the skills to design proper moleculars with suitable intermolecular interactions and fabricate the devices. 2) New generation of Organic Light-Emitting Materials and Devices: We try to seek the new organic light-emitting materials. The organic light-emitting diodes based on these materials can break the limitation of 25% of the internal quantum efficiency, and maintain the low cost.
Prof.Lu, Ping

Wide bandgap materials which emit violet or ultraviolet (UV) light (emission shorter than 400 nm), are also of great importance since such devices can be used to generate light of all colors either by the irradiation of luminescent dyes or by energy transfer to emissive dopants. The pursuit for wide bandgap materials has been an ever-increasing issue in organic optoelectronic field, because their performances are far from satisfaction. Our group mainly focuses on constructing wide bandgap materials with high performance and their application in organic light emitting diodes.
Associate Professor Li, Fenghong

Significant improvements of device performance in polymer solar cells (PSCs) have recently appeared due to an introduction of anode interlayer or/and cathode interlayer. Herein we report our efforts in terms of modification of interface between electrode and active layer. The doped conjugated microporous polymer (CMP) presents not only inherently uniform micropores and large surface areas but also a high work function and good conductivity. Power conversion efficiency (PCE) can reach 8.42% when the doped CMP film was used as an anode interlayer in the PSCs. It indicates the doped CMP film is a promising anode interlayer replacing PEDOT: PSS. Poly-N-alkylpyridine substituted metallophthalocyanine derivative VOPc(OPyCH3I)8 is a novel water-soluble organic small molecule. The PCE of 8.12% has been achieved when it was applied as a cathode interlayer in the PSCs, indicating that VOPc(OPyCH3I)8 is a new promising candidate as a good cathode interlayer for highly efficient PSCs.
Associate Professor Zhang, Ming

The detection of some compounds, such as explosives and metal ions are of great interest, due to their influence to the entironment, public security and human health. Our research group currently concentrates on fluorometric and electrochemical sensors for TNT, metal ions and anions. We have designed and synthesized a series of fluorescent conjugated/ compounds, and they have been applied to detect explosives, metal ions and anions by fluorometric channel with high sensitivity and selectivity. Specially, some materials have shown the very low limitation of detection (～ 10 -11 M) to Pb2+ as the electrochemical sensor, which is among the best reported results.